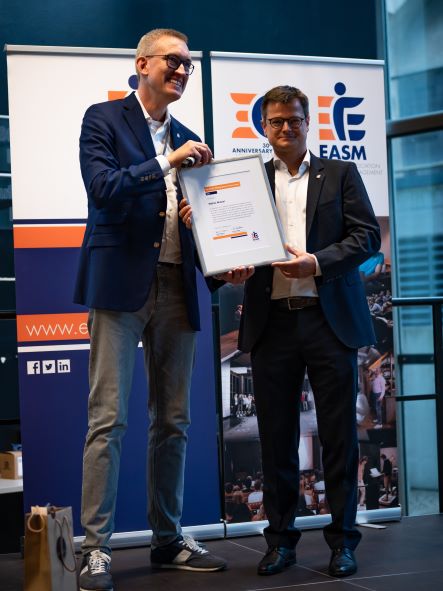 The announcement of the EASM Distinguished Service Award winner 2022 during the EASM Award Ceremony was a great surprise. Stefan Walzel was honoured for his outstanding work for EASM.

Stefan has been a true guardian of the EASM Constitution and has done his utmost for the advancement of the Association. He has worked for and helped develop EASM over many years and is an embodiment of EASM’s values. His commitment as well as his collegiality and loyalty represent the highest standards for the work in voluntary organisations like EASM.

“I feel very honoured to receive this prestigious award. It has been a great pleasure to serve EASM for many years and I want to thank all colleagues and friends who made this time so much enjoyable for me.” said Stefan after receiving the EASM Distinguished Service Award 2022.

The presentation of the Distinguished Service Award is a fitting way to round off Stefan Walzel’s tenure as EASM’s outgoing General Secretary. EASM is grateful for Stefan’s exceptional and dedicated work for the organisation. It has been an honour.

The EASM Board officially announced that Ulrik Wagner from Københavns Universitet – University of Copenhagen is honoured with the Distinguished Service Award of the European Association for Sport Management (EASM) in 2021. Ulrik has been involved for many years in EASM and lead the EASM PhD Student Seminar for nine years. In this capacity, he provided guidance and mentorship for more than 100 PhD students over the last years and helped them to successfully finished their PhD.

“I am deeply grateful for this prestigious award and would like to thank my colleagues for the award reception, which comes as a complete surprise for me. I feel very honoured”, said Ulrik directly after the announcement. 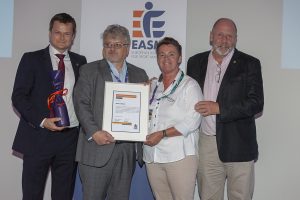 The EASM Distinguished Service Award was presented to Ruth Crabtree during the 27th European Sport Management Conference in Seville. EASM honorary President Per Göran Fahlström described the award winner as one of the unsung heroes, who stay in the background while being most important drivers for the development of the association. Ruth Crabtree has fulfilled the award criteria by far:

Ruth Crabtree has been professional and showed collegiality and expertise, she has always been acting within a respectful manner, proud of the EASM banner demonstrating the EASM values of inclusiveness, collaboration and integrity. She has been a fantastic team player, who makes her teammates better.

During the 25th EASM Conference, the first EASM Distinguished Service Award was presented to Professor Herbert Woratschek. Professor Woratschek has worked for and helped develop EASM over many years and in many ways:

Most importantly though and above all the work he has voluntarily undertaken for EASM, you can describe Professor Woratschek as simply a very decent, nice, kind genuine guy – values that any organisation would welcome.

The EASM Distinguished Service Award – recognises a member’s significant involvement and service to the work of EASM.
The accolade is intended to acknowledge the value and contribution made in fulfilling the aims of EASM within a voluntary capacity.

The nominee must meet the following:

EASM members can nominate a worthy recipient by submitting a nomination package to the Chair of the Award Committee, Annick Willem (annick.willem@ugent.be) before the 15th of May 2022, consisting of: